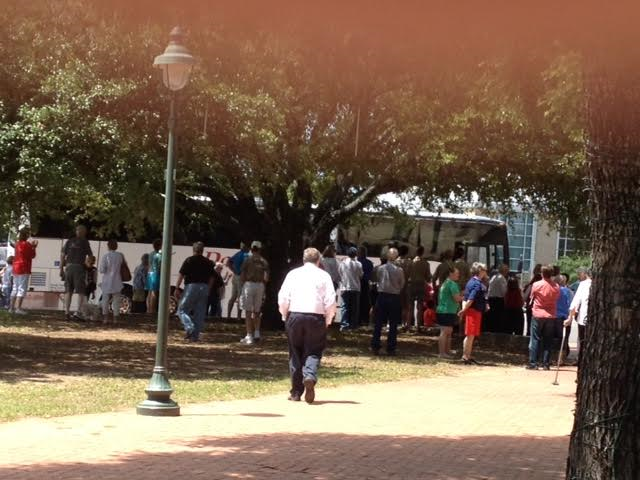 Wounded Warriors and their families on a weekend visit being greeted by local Fredericksburg, Texas, folks in the Market Square.

Memorial Day is here again and in our home it is a day with lots of memories. I really think I processed this year’s Memorial Day a few weeks back when I went to a Wounded Warrior event in the Marktplatz ( Market Square) of Fredericksburg, Texas.

My husband sings in a Fredericksburg chorale with a group of very talented locals. They were asked to be part of the program in the park for Wounded Warriors and their families who were visiting Fredericksburg for the weekend. For me, seeing military members and their families is a very meaningful way of visualizing what Memorial Day is all about today, as well as in the past.

I married into a family where my husband, his father, and his brother served in the  Navy. My husband was a Hospital Corpsman assigned at a Marine Corps Air Station. I went to work as a civilian there and then worked for the  Army at Fort Riley, Kansas, while he was in college (again). From there we moved to Denver where I worked for the Air Force for 11 years. I figure between us, my husband and I have all the services covered and I am familiar with all their songs; well except that Coast Guard one which I only recognize through the process of elimination

As the chorale practiced before the guests arrived on a bus, they sang a medley of the songs from each branch of the military services. The Army’s song was first. I remember some of the words from their song, but the musical experience I remember from my time at Fort Riley occurred when I was probably around 26 years old. I was walking on Post to go to a meeting at a building down the street from my office. As I looked up I saw some troops in formation out for a morning run. As they got near,  they all looked straight ahead, didn’t miss a step and loudly shouted a cadence directed at me. In unison they sang, “Hey girl—Looking Good— You Belong in Hollywood. Then they continued down the road passing by buildings which had once been horse stables for the Calvary. That was a memorable moment and one which probably wouldn’t be appropriate anymore, but these were infantry soldiers. I have often wondered how many came home safely from their deployments and assignments.

The chorale next sang the Marine Corps hymn which I recognized from having lived on a Marine Corps installation and hearing it on the radio over the years.  Then the Coast Guard song followed and I listened carefully in effort to familiarize myself with it in hopes of recognizing the tune in the future.. The Navy song came next.  With all the Navy folks in our lives, that one was easy to sing along with and to think back on wars won and peace enjoyed, because of the contributions of sailors like my husband and his family.

As the chorale moved through songs for the different military services, I remained seated. Then the Air Force song started. My body reacted instantly. I had spent ten years working in an Air Force headquarters level organization which served the Air Force worldwide community of active duty and retired military members. This meant that over the years, I and some of my co-workers, logged a lot of hours in meetings, ceremonies, and events listening to the Air Force song. So, I knew I was supposed to stand up, clap and start singing to “Off we go into the wild blue yonder…”. I considered staying seated so I would not be noticed by a crowd of people I didn’t know. My instincts and years of training overtook my body and I stood up moved to the side of the picnic area and sang away. I reminisced, cried a few tears, and smiled a lot. As the Wounded Warriors arrived and the chorale sang the medley again, it was exciting to see the military members and their families sing along and stand up to recognize “their” branch of service. On the way home my husband and I talked about how unexpectedly emotional the day had been for us.

As I have grown older, or clearly past middle age as my son tells me, I now understand that some people have never experienced working in a place where Reveille is played in the morning and the flag is raised, Taps are played at the end of the day during retreat as the flag is lowered, and that driving or walking during these times is not respectful or acceptable. Yes, sometimes we were tempted, but we knew better! I came to enjoy those few minutes of Taps at the end of the day before I dashed off into rush hour traffic. It was tranquil and inspirational.

As I said, Memorial Day came early for me this year.

Debra Hadsall has been involved in the financial management business in both public and private sectors for most of her adult life. For more than a decade she has concentrated her efforts on working with women and coaching them on how to be financially free by teaching them how money works and getting them involved in taking charge of their finances. She holds a degree in business administration from Regis University, Denver, Colorado. She retired as a financial advisor in 2012 to focus on promoting the second edition of her book, Financial Freedom Party for Women®, A Little Book about Money for Women, now available in workbook format. Debra created the Financial Freedom Party for Women® with the support of other women who recognize the importance of providing information and tools to allow women to become financially confident. She currently resides with her husband in Port Isabel, Texas. View all posts by Debra